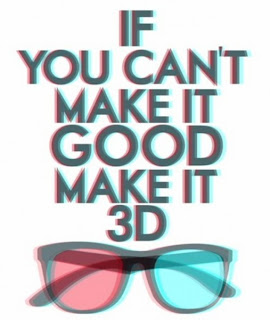 My six year old son and I went and saw the new Monsters Vs. Aliens movie yesterday in 3-D. Apparently, 3-D movies are being touted (again!) as the next big thing in movies. The technology has improved, so that while you still need to wear special glasses, those glasses no longer have one red eye and one blue. The new lenses are clear and cause considerably less eye strain. Thanks to this breakthrough, some studio execs are now predicting that all movies will be shot in 3-D in the future. (Really? Star Wars I could see, but Steel Magnolias? Why?)

DreamWorks said they spent some $15 million turning Monsters Vs. Aliens into a 3-D feature. I am sad to report that it was not money well spent. The 3-D effects added absolutely nothing to the movie. Except for the obligatory paddle-ball scene in the beginning, I didn't notice any point where 3-D was essential to tell the story, and I barely noticed any 3-D effects at all. In fact, there were several explosions that were prime opportunities to do something special with 3-D, but they were squandered.

DreamWorks should have spent some of that money improving the story. This was a fantastic premise turned into a so-so movie. The jokes were tired, the characters poorly developed, and the plot lackluster. (My son can't wait for the sequel, though: five stars from him and a half-hearted three from me.) I want movies where a well-crafted story brings the movie to life in my imagination. You can't use 3-D as a cheat for that.

If done right, 3-D can yield some cool special effects. For example, I like the interactive experience of the Mickey's PhilharMagic movie/ride at Walt Disney World - but 3-D is only a part of that overall experience, which also includes tangible, real-world special effects like spraying water on the audience. And that underlines my point: 3-D will always be a novelty. It can give us a momentary thrill, but it will not make or break a movie.

And even thought the new glasses are better than the old red/blue ones, the picture quality is still a little blurry, and it is still uncomfortable to look through them for long stretches of time. If forced to choose, I would take a traditional 2-D picture with a clearer view of the action every time.