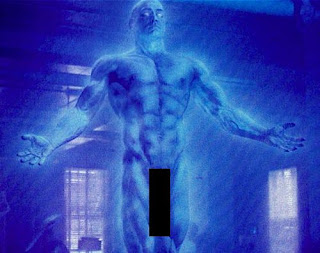 Rating: *** three stars ("worthwhile") if you're a normal people, plus one bonus star ("recommended") if you're a fanboy/fangirl. However, only one star ("avoid!") if you're my mom.

Comments...
So here is my movie review quote (for the back of the Blu-ray packaging): "Bravo... visually impressive... one-of-a-kind... I am happy this movie got made... make Watchmen 2."

And here is the Crazy People quote: "Decent film... not for kids... struggling to meet expectations... flaccid blue penis."
Posted by Rico Detroit at 8:38 PM